Linda Basler and Jo-Anne Joyce met for the first time earlier this month. Less than a week later, they went on an epic road trip together: a 1,300-kilometre adventure from Winnipeg to Churchill.

Their journey wasn’t just for fun, though. Their mission? To deliver the first brand new vehicle in CNSC’s fleet in over a decade. The new cargo van, which arrived in Churchill Feb. 17, will be used to deliver Rocket Greens produce to the community.

It’s the first-ever vehicle dedicated to the food production initiative, which is led by Linda and Jo-Anne’s daughters, Carley and Fiona.

“If there’s ever an opportunity for a mom to save money, save time, or visit their daughters, they take it,” says Carley, CNSC’s Sustainability Coordinator.

And that’s exactly what these mothers did. 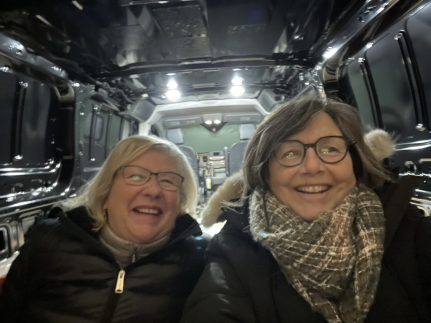 Linda (left) and Jo-Anne (right) sent their daughters this selfie after meeting for the first time.

Linda offered her driveway as a staging ground for the vehicle before the journey. There, family members and friends of CNSC staff packed it full of necessities and goodies for their loved ones, since the cost to transport the vehicle would be the same whether it was empty or full.

That’s where Linda and Jo-Anne met. Jo-Anne joked that she was jealous of Linda’s upcoming trip, and Linda immediately invited her to join.

“If you’re interested in riding along, I have an empty passenger seat,” Linda told her.

Six days later, the two set off from Winnipeg. 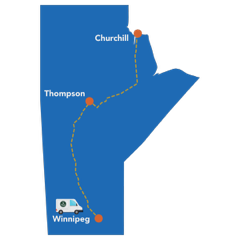 It can be tough to drive in Churchill; rough roads and harsh weather often combine to make for slick conditions. The road north from Winnipeg that morning proved to be a good test for the van, as the women passed half a dozen vehicles in ditches due to an icy highway.

“We were white knuckling it for a little while,” says Jo-Anne, who adds that the new Rocket Greens van handled itself effectively.

Of course, they made a few stops along the way to take photos of the van on its maiden voyage, like at the giant Canada goose in Lundar and the 53rd parallel sign. 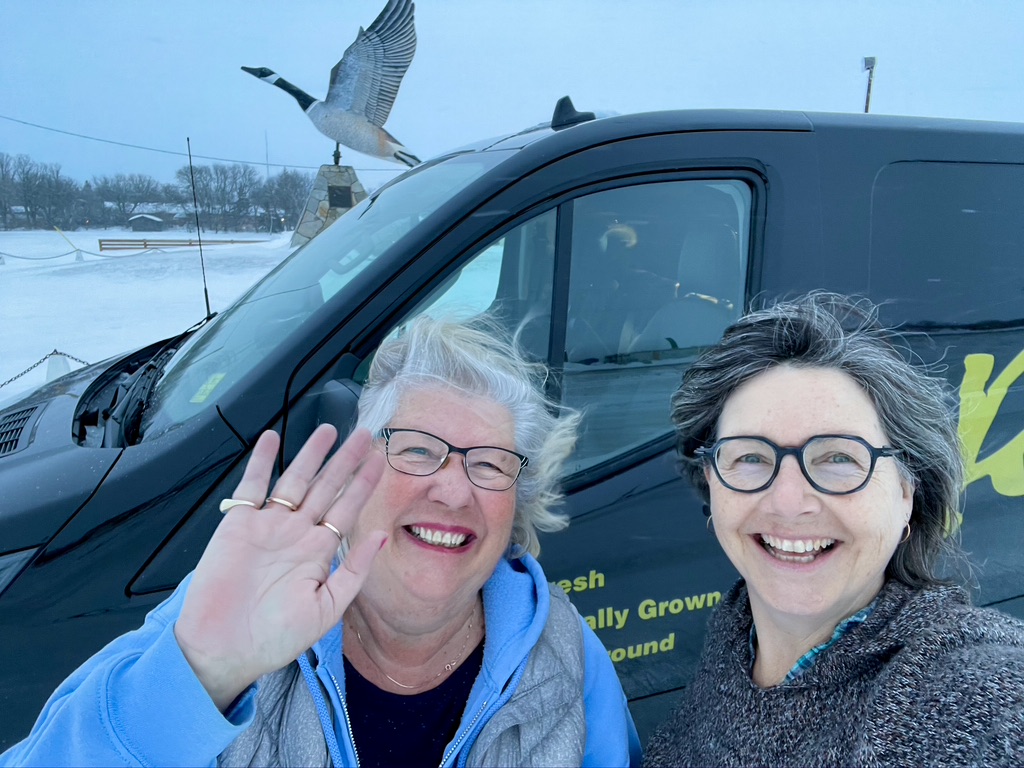 Linda and Jo-Anne in Lundar, MB. 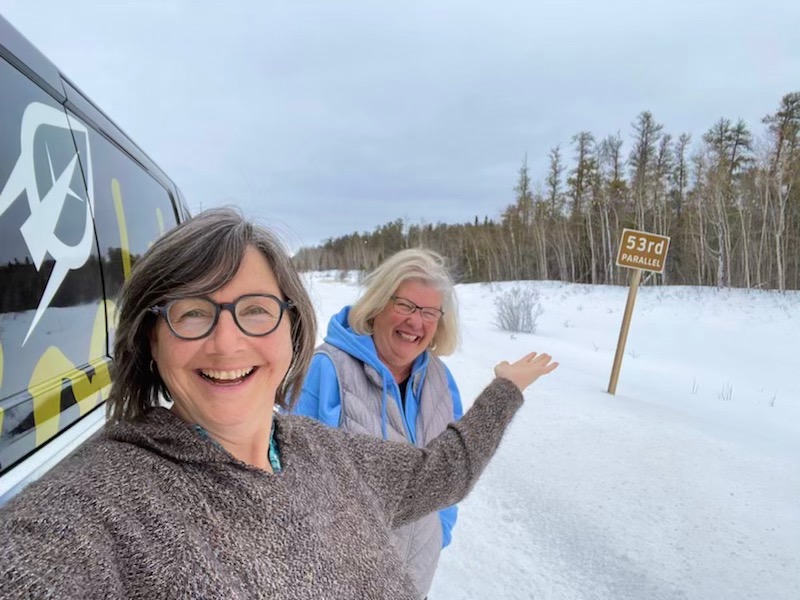 Jo-Anne sent the photos to Fiona, CNSC’s Sustainability Technician, who posted them to social media with the hashtag #rocketgreensmoms so people could follow the journey.

In response, a wise Instagram user commented: “The best moms in MB, who else drives to Churchill with those conditions? Only superheroes!!! You mommas are the best!!!” 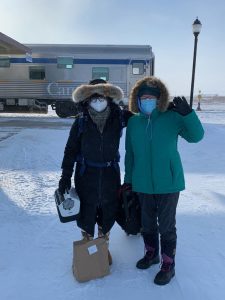 Jo-Anne (left) and Linda (right) arrive at the train station in Churchill.

When they arrived in Thompson, they loaded the cargo van onto the freight train for its destination (and theirs): the CNSC.  The passenger train left that evening, so they arrived the following day, but the van would take another week to get to Churchill.

For Jo-Anne, that meant a chance to experiment with the leafy greens from Fiona’s Launch Box subscription.

“I loved the variety,” she says. “I find it excellent that there are a variety of plants with a variety of nutritional bonuses, offered in rotation. They’re growing things that people want to cook with and want to eat. It’s pretty impressive.” 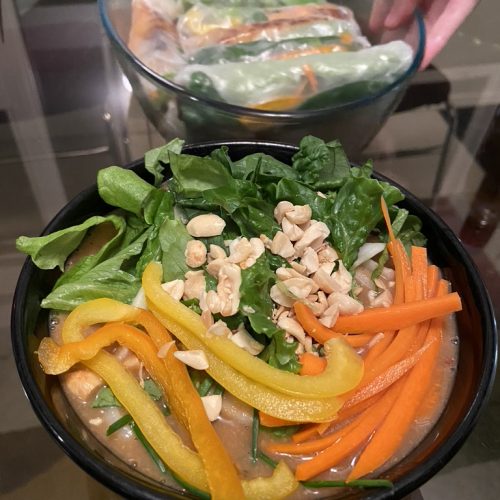 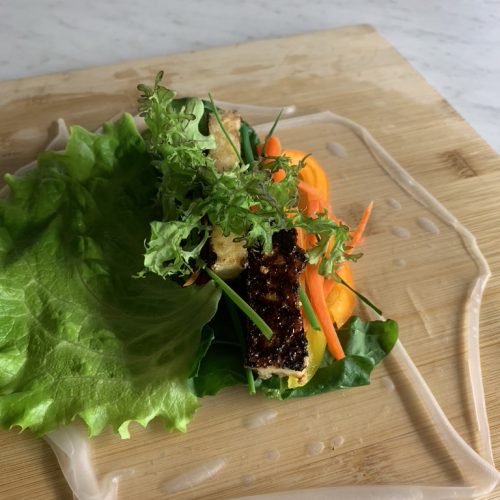 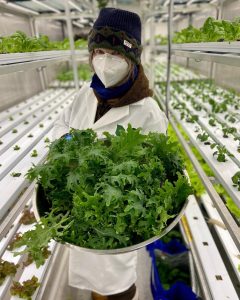 Jo-Anne helped to harvest, clean, and transplant during her visit to Churchill.

Jo-Anne is a botanist who oversees the operations of the plant growth facilities at the University of Manitoba, so she was delighted to take part in the whole Rocket Greens operation, even helping to harvest, clean, and deliver greens on Wednesday.

“It was cool to go through the entire process. It was good to see the nitty gritty; it seems to work really well.”

The day after the van arrived, Jo-Anne flew back home, but not before a brief reunion with the vehicle, which she says looks a little dirtier after its inaugural trip.

“It shows the journey,” she says with a laugh.