Blog post written by: Kelli Kandra, a volunteer during the 2018 fall season 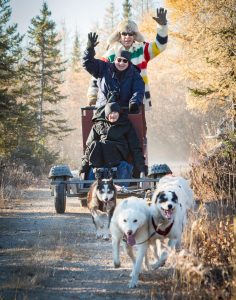 Rosemary and Frankie with Dave Daley at Wapusk Adventures

For Rosemarie, her desire to visit Churchill has been around for a long time. She would look at a map of Canada as a young girl and dream of the places she wanted to visit. But Rosemarie couldn’t travel when she was younger. Once she started traveling in later adulthood, she didn’t want to stop. So now in her older age, her daughter, Frankie, travels with her.

“We’re doing as much as we can while we can,” said Frankie. “It’s my joy to assist to her to see things she’s always wanted to see and I get the gift of seeing them too. Our bond is the memories that we get to make together. Over the winter, I take all kinds of photos, print them off, and take them to her. Looking forward to a trip gives her something exciting.” 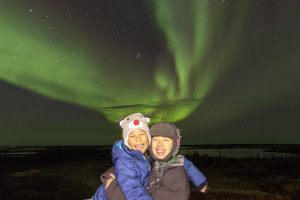 Being only nine, Churchill wasn’t necessarily on Quilla’s radar of places to visit. But it was definitely on her mother’s. Julia first got the idea to visit Churchill in 2004 while she was researching a trip across Canada. Up popped information for Churchill and she thought, wow, I’d love to do that someday. Now that she has Quilla, Julia thought it would be a good time to visit. She wanted Quilla to experience seeing polar bears, other arctic wildlife, and the northern lights.

In a fun twist, it was thanks to Quilla they even saw the lights. Julia hadn’t realized that October was not a good time for viewing them because of cloud cover. But then one night Quilla wanted to see the stars. Julia agreed that they could look at them for a few minutes before bed. And that’s when they saw the northern lights. Quilla and Julia went and knocked on their group’s doors so everyone could go outside on the observation deck. They ended up staying out there for an hour and a half.

Quilla’s favorite part about the trip, however, wasn’t the northern lights. She liked the dog sledding best because it was, “fast and windy and fun.” Rosemarie shared Quilla’s enthusiasm for the dogs. “The huskies are amazing, amazing dogs. They are friendly and they all want to go! It’s amazing 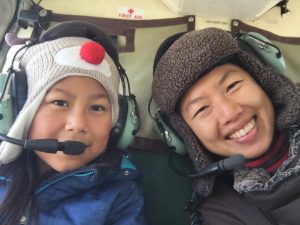 Quilla and Julia on a Hudson Bay Helicopter tour.

that when they travel, they gallop. They would get a command and they would understand, exactly like a horse would do.”

Also, at the top of everyone’s list, was the helicopter ride. Quilla loved that she saw an additional four polar bears while on the helicopter. Rosemarie was delighted to see that the Hudson Bay wasn’t frozen, even though she thought it was. It sure looked that way at five hundred feet. But when she told the pilot it was frozen, he dropped the helicopter down to 200 feet so she could see it closer. “Amazing,” Rosemarie exclaimed.

Overall, Julia and Quilla and Rosemarie and Frankie are glad they came to Churchill for Lords of the Arctic. As Julia says, “I think learning vacations are a great model. They’re better than a commercial operator.” Rosemarie agrees. When asked if she had any advice she said, “Be curious. Just go ahead and be nosy.” Quilla, however, adds a caution. “Have warm clothes. And bring a camera to take photos. And bring binoculars.”