Whether I am up north, or visiting friends and family down south, people frequently ask me, “why did you move to Churchill”? For those who know me, I am interminably cold. Growing up in southern Ontario, the hot summer temperatures and rays of golden sunshine meant nothing to my freezing fingers, ice-cube toes, or the multiple sweaters I always kept on hand. It, therefore, came as a huge shock to everyone when I announced that I was moving to Churchill to take a research technician position at the Churchill Northern Studies Centre. Why on earth would anyone, whose body was in endless winter, move to the subarctic?

Since I began pursuing a life in science, I have embarked upon many adventures. Prior to my northern migration, I had moved back to my hometown of St. Catharines, ON, having lived in the warmth and sunshine in Australia while I was completing my MSc. Despite my trepidation of the cold, my move to Churchill would be my next great adventure. What began as a 6-month opportunity has turned into a 2-year subarctic expedition, and while I may not always be warm and toasty, I have embraced everything that this polar adventure has had to offer.
Looking out of the plane window while I flew north that October 2017, I left behind the golden leafed warmth of autumn in the south, and arrived in a land of snow, frozen winds, and polar bears. What had I gotten myself into? None of my pre-adventure research had prepared me for what I was about to encounter. My arrival in Churchill was a whirlwind of snow, nerves, and a lot of visitors.

For those of you who have never experienced a bear season in Churchill, it is brilliantly chaotic. Although I was starting my new adventure as a research technician, science was to be put on hold for the next 6 weeks, while I was introduced to a variety of people visiting from around the world, all with a common goal: to see a polar bear. Those first few weeks were a magical blur of tundra buggies, bears, and airport runs. While my science career at the CNSC had not quite begun, I had quickly become used to the wonderfully crazy hubbub that is the Churchill Northern Studies Centre. 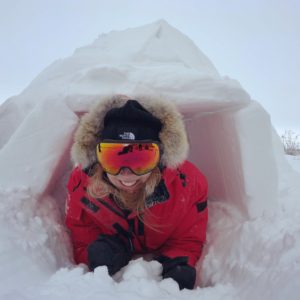 As the air temperature dropped even further into the negative digits, I remember feeling apprehensive of the upcoming winter field season. I struggled to avoid freezing in the mild winters back home. How was I going to survive, let alone work outside in a climate where bitter winds could drive the temperatures down to -50°C? Diving headfirst into the field season, layers quickly became my best friend. With an ample supply of hand and foot warmers, I quickly grew to enjoy the outdoor fieldwork. My days were filled with snowmobiles, gear sleds, and tundra hot chocolates, and my nights were stargazing and watching the dancing aurora. Although I enjoyed my winter fieldwork, I was definitely inexperienced at working in such frigid temperatures dressed like a stuffed marshmallow, and that first winter was long and exhausting. But it was also strikingly beautiful. It was easy to understand how tourists visiting Churchill during the winter aurora season, could be in such awe. The trees are laden with snow, their trunks and branches sparkling with ice crystals. Even the barren tundra could be breathtaking in its frozen vastness.

As the long winter slowly melted into an imperceptibly warmer spring, I was excited to go back to my roots and to be in a lab dissecting some of the different fauna that are so well adapted to life in the cold. I have an extensive background in science outreach and education, and I was excited to be a part of the outreach that the CNSC is involved with. Working with the youth in this remote community was a definite learning curve. Until this point in my career, I was used to working with city children, who typically had little interaction with wildlife. It was very different, interacting with children who probably had more experience and knowledge of local wildlife than I had.

The arrival of the first warm winds in June meant that I had successfully survived my first winter in the subarctic and that the summer field season was right around the corner. One of the best aspects of being a research technician at the CNSC is the opportunity to work with a prodigious number of visiting researchers. That summer was a very steep learning curve. I had to recall information on subjects that I had not studied in years. It was challenging but enjoyable to step out of my field of expertise and dip my toes into other areas of science.
I have been fortunate to be able to work and interact with a large variety of wildlife through my education and previous jobs. But nothing could prepare me for the childish joy I felt when I first kayaked with belugas that summer. It is impossible to paddle through pods of belugas without laughing and gasping in delight as a beluga surfaces right next to your kayak. It’s a humbling experience that makes summertime in Churchill extra special. 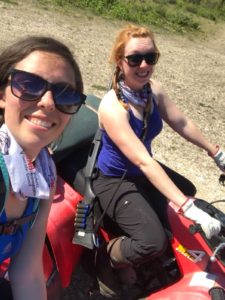 That summer, Churchill experienced a few unusually hot days. While the town quickly ran out of ice cream and milkshakes, I was in my element. These 30+°C temperatures finally allowed my iced body to thaw. As I entered that first summer, I was confident in returning south once my contract was over in August. But as the end of summer drew closer, I realized that I was not done learning and experiencing everything that northern research had to offer. My fate was sealed as the opportunity to step into a full-time position became available.

That first year, time flew by incredibly fast, and I was surprised to find my perpetually chilly body slowly acclimating. This time, as the new bear season approached, the cold winds didn’t completely steal my breath, and I was able to function with one less fleece layer. Despite having one bear season already under my belt, and a handful of polar bear encounters during the summer season, it was not hard to be reminded of what a wonderous place I lived in, and the incredible opportunity I had been given to work here, as I was once again bouncing across the frozen tundra, chatting to guests, and looking for bears.

This time as the temperatures once again began to plummet towards -40°C, my previous apprehension towards the frigid field season was gone. Instead, I was looking forward to another winter of snowmobile rides and snowshoe hikes through this frozen but fantastic landscape. This winter, I felt much more prepared, armed with my knowledge from the past year, a new stock of hand warmers, and a pair of deliciously warm beaver fur mitts. Another season of snow cores, igloos and auroras flew by, and too quickly summer arrived.

Summer was still, and will always be my favourite season in Churchill. Summer meant I could again rub elbows with the array of researchers and guests that would come and go all season. But it also meant the opportunity to once again interact with the belugas! Being the full-time technician this summer meant taking on more responsibilities in the office and as a bear guard for visiting field courses. While I was taking a step back from working with our citizen science groups, I was able to see the tundra and experience fieldwork through the fresh eyes of undergraduate students. 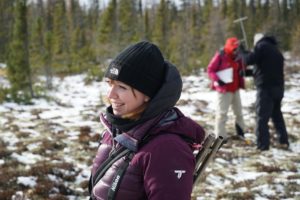 I am now approaching my second anniversary in Churchill, and as my third bear season draws near, I am positive that it will be filled with another 6 weeks of wonderful chaos. The experiences that I’ve had up here have been unforgettable. As my time winds down at the CNSC and I leave to continue on my career path, I will always be grateful for the advice and support of LeeAnn Fishback, the researchers that I’ve worked with, the continuing support of the CNSC staff, and the wider community of Churchill. 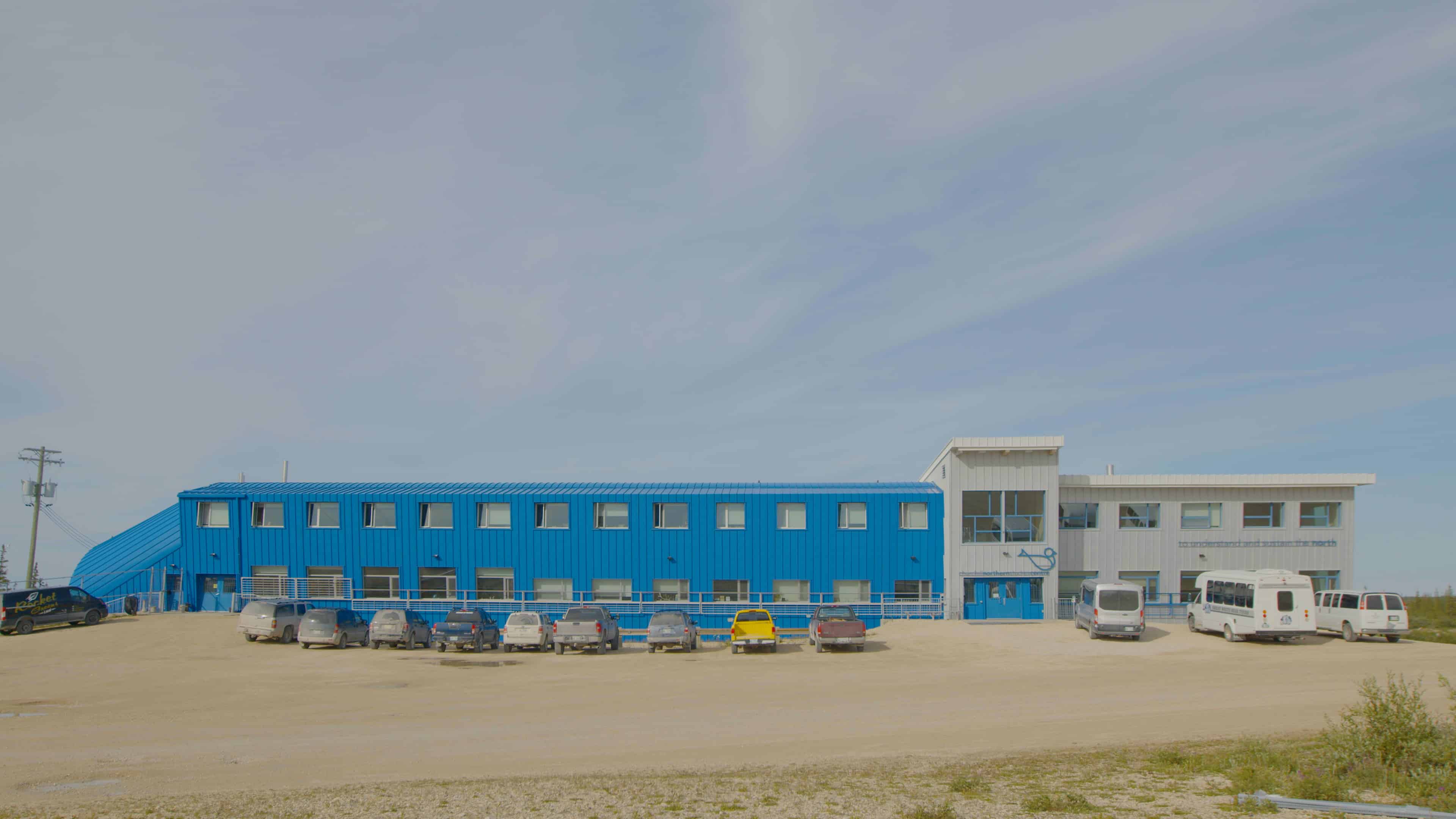