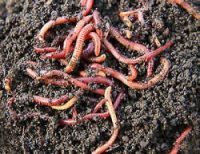 Some of you reading this might know (although most won’t) that I was the part-time Summer Research Technician in 2003 and 2004.  I was an Environmental Science Major at the University of Manitoba at the time and was learning a lot about living sustainably.  I was introduced to Red Wriggler composting worms at a waste management conference.  I was fascinated that they could eat 7 times their body weight in kitchen scraps in a year, occupy a small space and allow you to compost year round without having to put food scraps outside. In the summer of 2004, I decided we should try to use some at the CNSC.  I remember them arriving pretty clearly, because I thought it was funny that a pound of worms travelled here on an airplane (I rarely flew on the airplane back then – the train was all the rage and only took 36 hours from Winnipeg!).

We set up the worms in a Rubbermaid bin and started feeding them compost from the CNSC kitchen.  As the worms established themselves, the single Rubbermaid grew into two and then into four and then more and then more.  Red Wrigglers are hermaphroditic – so it only takes two worms to tango!  They breed often and lay up to 21 eggs at a time!!  I had two bins full of worms of my own at home and word started to get around town.  We shared them with whoever was willing to give it a try and even had a promotional flyer in the Town of Churchill office.  The worms were some of the most travelled – I even took them skidoo-ing once or twice!

The worm bins moved with us from the old CNSC facility into the new building in 2011 – it was around this time that I moved away from Churchill.  My personal bins were left with a friend and the ones occupying the new CNSC building were being cared for by the science staff.  I think they were up to around 6 or 7 bins full by then!

I’m told that the worms were fed kitchen compost for a few years before it was suggested that they live in the CNSC composting toilets!  I think it went something like this:

Guy from compost toilet company:  Boy, it would be nice if you guys had some composting worms that could go into your toilets! 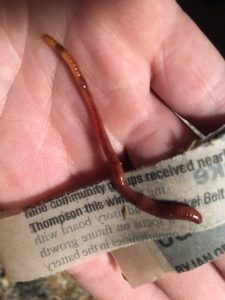 I returned to Churchill in 2017 – and started working again at the CNSC.  I was so happy to hear of the worms new occupation helping the sustainability of our composting toilets.  I was eager to have some at home, but first had to devise a plan to “harvest” some out of the toilet.  I will spare the gory details, but I now have a thriving bin at home, making the best use of my kitchen scraps.  The worms continue their very important work in the CNSC composting toilets and I hope to harvest out a few more to share with anyone who is willing to try Red Wriggler Vermicomposting at home.