“You cannot interpret the shape of trees

as anything other than a collective memory” (19-20)

This could not be any clearer than at the northern limit of the boreal forest near Churchill, Manitoba. If you were to set off from the Churchill Northern Studies Center, on a bumpy and slow snowmobile ride across the tundra towards the coast of Hudson Bay, you would encounter many trees whose shape reflects their collective memory of the harsh conditions around the Bay.

Here, powerful NW prevailing winds, cold air from the Bay, and wind-driven snow limit the ability of trees to grow. At the mercy of these forces, isolated trees are in trouble—they struggle to germinate, to establish as seedlings, and to grow through the “zone of abrasion”. The zone of abrasion refers to the harsh combination of wind and snow crystals that can abrade the living tissue of the tree, and extends to nearly a meter above the snow’s surface. Trees must race to grow through this zone before their needles are stripped away.

And, even if trees survive the zone of abrasion, they can’t fully escape the influence of the wind and snow. You would likely see many “flagged” trees, with the needles and branches stripped off the windward face by the strong NW winds so that they resemble flags blowing in the wind. Or, you might see trees so damaged by wind and snow that you barely recognize them as trees—unable to grow upright, they creep along the ground in gnarled mats, called “krummholz” after the German word for “bent tree”. 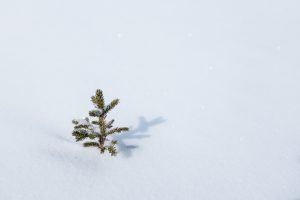 The life of an isolated tree in the exposed coastal tundra certainly leaves a lot to be desired. However, there is strength in numbers: trees can provide shelter for each other, thereby facilitating the growth of their neighbours, and forming small groups of trees. These groups of trees are called “tree islands”—literally, islands of trees in the otherwise treeless and open tundra. Close to the Bay, most of the tree islands you would see are composed of white spruce (Picea glauca). White spruce is a hardy species that prefers the relatively well-drained soils of the gravelly ridges and dunes near the coast. Black spruce (Picea mariana) and tamarack (Larix laricina) do better in wetter soil, and are found only occasionally in tree islands near the coast.

One of the first descriptions of tree islands was in a 1977 paper by John Marr, who studied tree islands at the alpine treeline in Colorado. Marr described the development of a tree island, from the germination and growth of a single seedling in a spot sheltered from the wind, to the growth of a clone in the leeward (downwind) shelter of the original tree, and the subsequent spread or elongation of the tree island. Tree islands spread parallel to the direction of the wind, and the degree to which they are elongated may reflect the relative strength of the wind. In this sense, the shape of entire tree islands represents a memory of past (and current) conditions.

Although Marr defined tree islands as clusters of trees that spread clonally from a single parent tree, new trees can emerge from seeds as well. The canopy of neighbouring trees provides shelter to these growing tree seedlings from heat loss to cold winter skies, and from harsh sunlight. Neighbours can also provide shelter from the wind. As the tree island expands in size, it redirects wind and traps and filters snow, creating large drifts of snow on the interior and leeward sides. In the winter, this snow can insulate seedlings from cold and abrasion damage; and in the summer, melting snow can provide growing seedlings with a source of water. In other words, tree islands shape their environment in ways that favour the growth of yet more trees, creating small islands of forest-like conditions in the tundra. 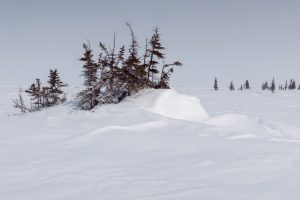 A small tree island with a large drift of snow that has accumulated on the leeward side. Photo: Owen Fitzpatrick.

On your return trip to the Churchill Northern Studies Center, with your back to the NW wind and a minus-40 °C windchill, it is easy to feel like the tundra isn’t a very hospitable place for trees, let alone yourself. And you’d be correct. The trees would likely be happier farther south, comfortably within the boreal forest, just like you’d be happier inside the Center, with a cookie and a warm cup of tea. But, like you, trees are adaptable, succeeding in unlikely places—with a bit of help from friends.

PrevPreviousKale and Conversation
NextFall 2018Next
0 shares