by Eric DeChaine, Professor of Biology, Curator of the Pacific Northwest Herbarium

I am a naturalist at heart, striving to better understand the natural world: the diversity of species, their environment, and their interactions. Unfortunately, we are currently losing biological diversity faster than at any time in human history. So, the challenge is to survey the natural world now with the hopes of understanding and conserving biodiversity and the underlying processes that have given rise to it. For long-term preservation, it is critical to foster children’s natural curiosity and enjoyment in nature so they grow into lifelong stewards of the environment.

That is why I brought my family with me to perform biological research around Hudson Bay. Though my daughter Gracie is only 7 and my son Jasper is 5, they have already assisted me on several botanical expeditions from Japan to Greenland. Interestingly, we’ve primarily been based in the backcountry rather than at a research station. For our current study, the warm and welcoming Scientific Coordinator of Churchill Northern Studies Centre (CNSC), LeeAnn Fishback, provided us with an opportunity to use the Centre as a headquarters for our research. In so doing, she set in motion another experiment: The response of children to life (3 weeks) at a northern research station.

The focus of our research was the role that cushion plants play in maintaining biodiversity in the arctic. Plants are the foundation of terrestrial communities. Yet, much about plants in remote arctic and alpine regions remains unknown. The genus Saxifraga, or the stone-breakers as they are called, is diverse and abundant in arctic and alpine environments. Many form cushions: small, low to the ground, highly branched growth forms. Cushion-forming plants increase biodiversity because they alter the microenvironment in such a way as to facilitate the establishment of other plants and all their nooks and crannies support diverse invertebrate communities including insects, spiders, etc.

For all inhabitants of the arctic, the transition to winter is a critical time for survival and the loose cushions of Saxifraga tricuspidata (a.k.a. the Three-toothed Saxifrage) may provide a safe harbor for many small animals during that time. This species is vital to the arctic community from Alaska to Greenland because it hosts a diverse suite of pollinators that feed on its copious nectar (making it one of the most pollinator-visited flowers in Greenland. But, we don’t know how this species impacts the biological community after the flowers disappear and winter sets in? So, my family and I set out to investigate the role of S. tricuspidata as a winter refuge for the terrestrial invertebrate community around Churchill. This meant searching for plants in the tundra and digging around in them to find bugs – a “chore” that my kids accepted enthusiastically! 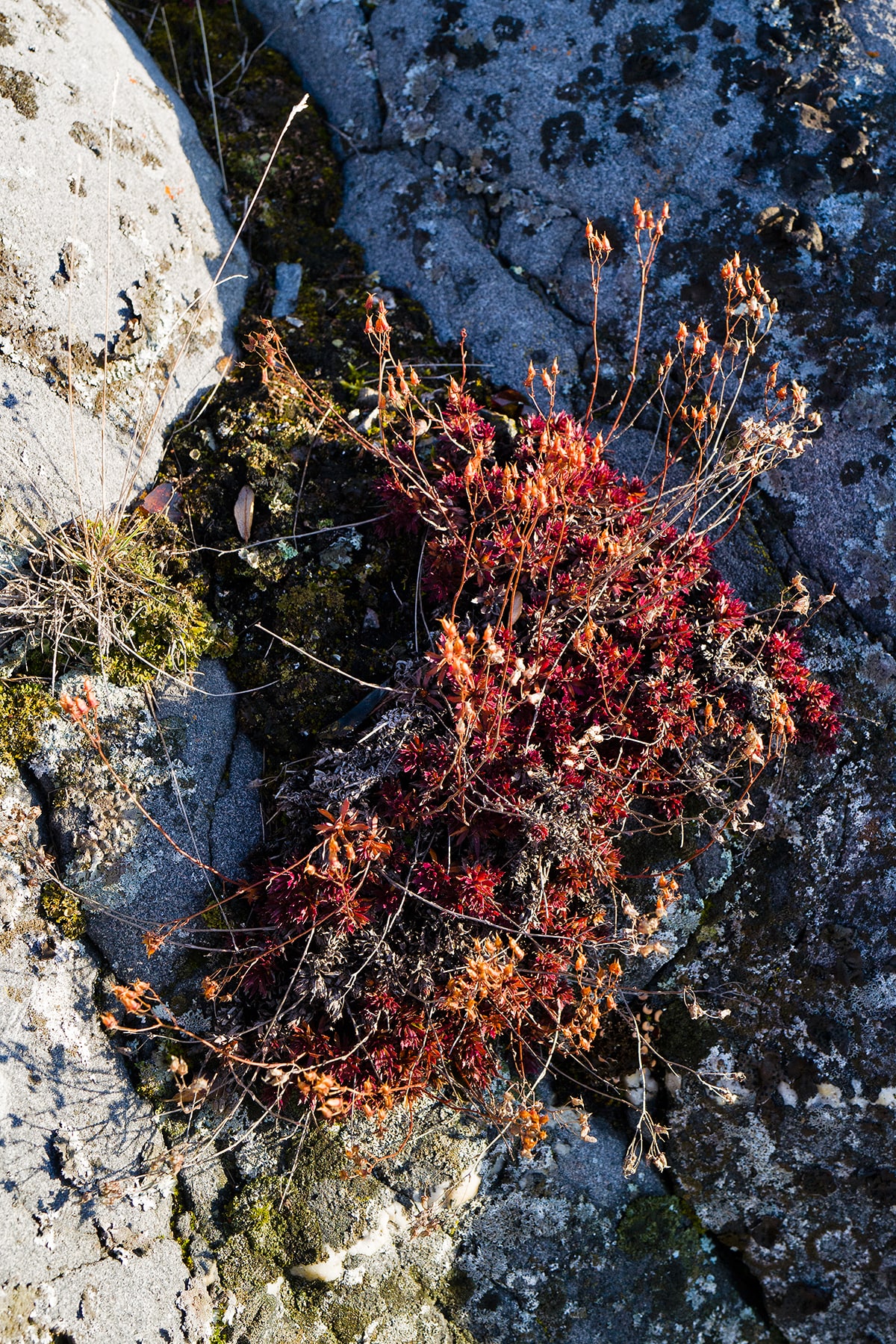 To begin, we took the Via Rail train from Winnipeg to Churchill, which in itself is a delightful experience for kids. We rode through forests of golden larch and past numerous beaver lodges that we viewed from the dome car. And, our convertible cabin was a comfortable corner for homeschooling (led by my wife, Jenine) and sleeping. Unbeknownst to us at the time, the train ride gave us all an important perspective on being confined together in a small space. Kudos to the friendly and helpful staff who ensured that it worked out wonderfully. We arrived in Churchill just before the snow to look for plants when most folks came with the hopes of spotting a polar bear 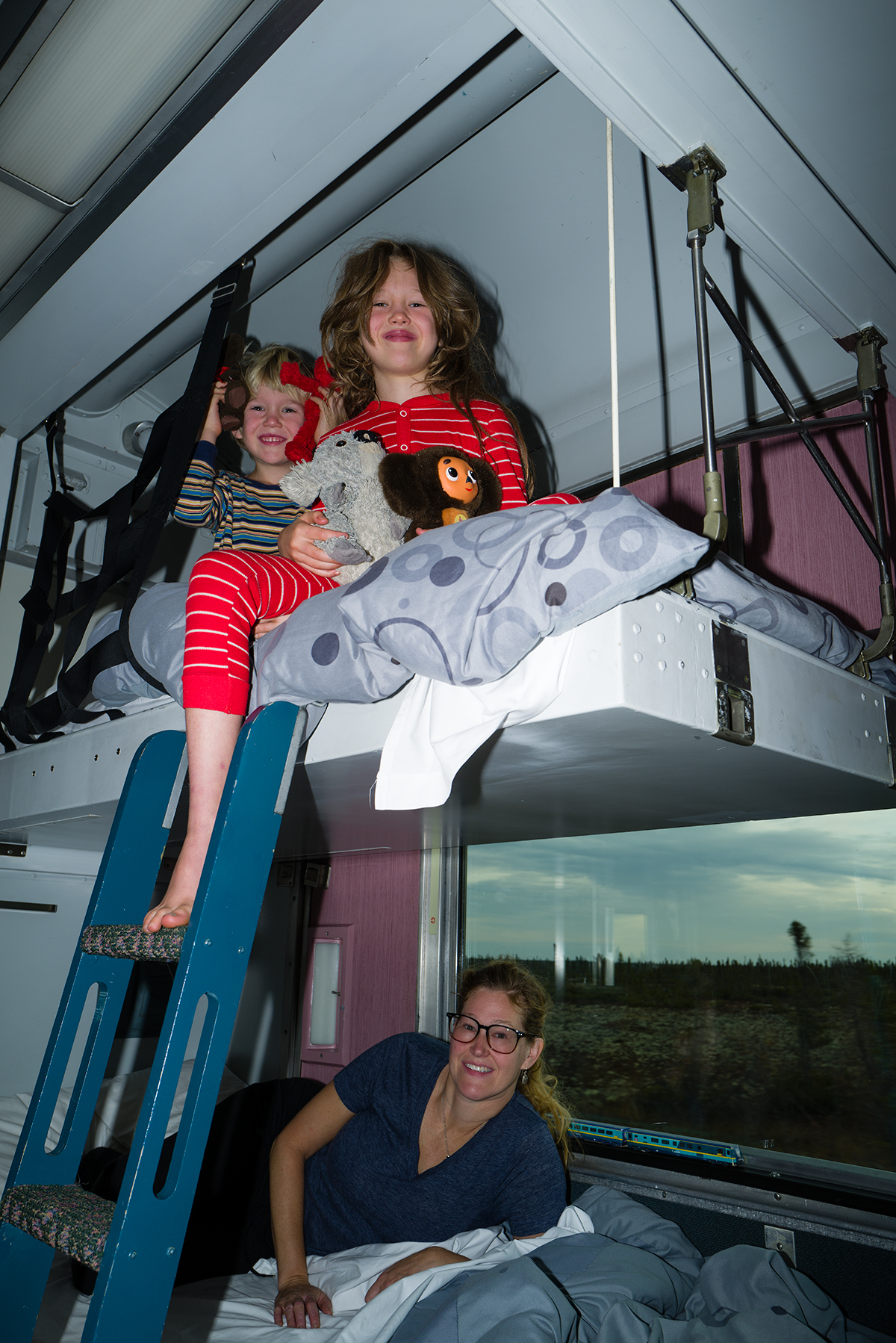 Gracie, Jasper, and Jenine in the cabin on the train. 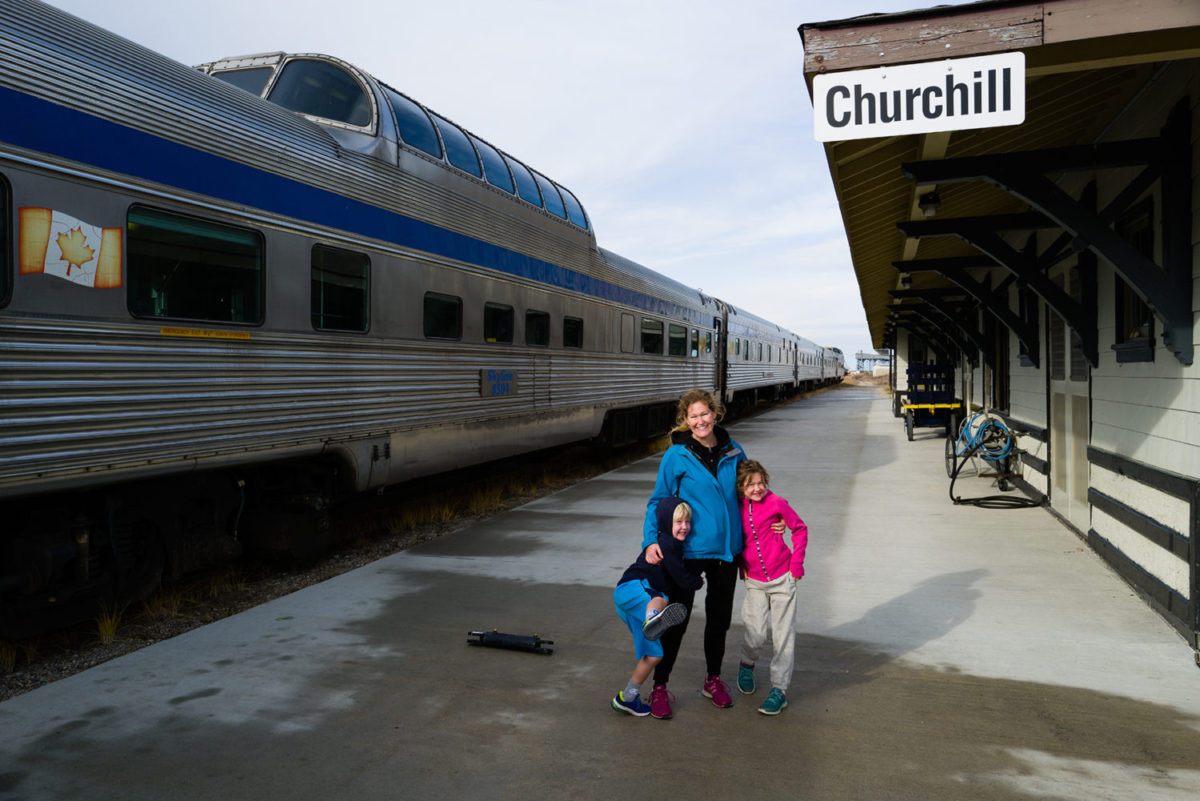 Owen picked us up at the station and by the time we arrived at the CNSC we had all seen our first polar bear wandering in the stunted spruce forest! The ever-cheerful Emma welcomed us and gave us an orientation to the Centre. After our time on the train, the Centre seemed spacious and our dorm room with its four bunks was palatial. We were lucky in that we arrived just before the tour groups so we had the opportunity to get to know the staff and volunteers a bit in a quiet and cozy environment. Before we knew it, we were settled in and eating the first of many delicious meals (Note: between Bob and Kate’s tasty cooking and the endless supply of cookies, cakes, and cinnamon rolls from Peggy, the kids were happy and healthy eaters). All the folks at the Centre really made family life enjoyable.

Indeed, life at the Centre was excellent for engendering community values and teamwork skills in our children. Because we arrived before the tour groups, the children adopted the Centre as their home and we were there long enough to become part of the community. They consciously tried to get to know everyone. And then they took pride in being part of the team. They felt responsible for doing what they could to help out in the dining room and tried to be respectful of other’s needs (such as quiet areas in the dorms). They weren’t angels. They were kids. But, they were pretty good. They grew to feel ownership of the space and confident among the many adults that passed through the Centre. Jenine homeschooled the children and they joined in on learning activities when the local school kids came through. In addition, there were many opportunities for meeting and interacting with visiting scientists and even sitting (with a bit of squirming) through lectures from Canada’s leading polar bear biologists. For Gracie and Jasper, it was a fun home with opportunities to view sunsets from the aurora dome, play hide-and-seek behind the polar bear pelt, and exchange research and wildlife stories with the various travelers. They even watched polar bears from their bedroom window!

The biggest hurdle we had to overcome was that we couldn’t simply go outside and run around (something kids like to do) because we were now living in polar bear country. We were quarantined! But, with access to the Suburban, we were able to drive to Churchill to walk among shops, go for a swim at the municipal pool, and play with other kids inside the community complex.

Our greatest freedom of movement in the fresh air came on fieldwork days. It is important to note that over the past several years of doing fieldwork together, Gracie and Jasper have not only become excellent saxifrage spotters but also are very respectful of how to behave in the wilderness. I’ve worked hard to make them respectful, rather than fearful, of bears and other wildlife. It doesn’t mean that they don’t get distracted and climb boulders or that they always stay at my side, but their preparation made the field experience in polar bear country possible. Here, we had the benefit of being accompanied by a bear guard – someone from the CNSC who was trained to watch for bears and carried a shotgun as a bear deterrent. From the very beginning, the children knew that we all had to listen to the bear guard who was there for our safety.

Luckily, Gracie and Jasper were in the vehicle when we had our first polar bear encounter. Alex (bear guard) and Owen had accompanied us on our first day of fieldwork. We visited dry, rocky sites along the coast where the bedrock is exposed but out of the salt spray of the sea because that is where S. tricuspidata grows (note: polar bears also favor that habitat). The kids had gotten cold while successfully collecting specimens at one site, so at the second location they opted to stay in the vehicle with Jenine. Owen, Alex, and I could see all the way across the open rock to the water as we walked and looked for plants. But, the bedrock was broken up with many large holes perfect for a bear to take a nap out of the wind. Suddenly, one stood up a ways off in front of us. We did what Alex said, remained calm, and slowly walked back to the vehicle. It was a safe experience in which to recognize the reality of polar bears in the landscape.

We continued our fieldwork over the next 2 weeks with Dani as our bear guard. Dani sparkled with enthusiasm and confidence. On one occasion, she got out of the vehicle to check if the area was safe for us, only to return a minute later because of a polar bear nearby. Needless to say, we didn’t get out there. But, we all watched it meander among the saxifrages from the safety and warmth of our Suburban. Overall, the days of fieldwork provided wonderful opportunities to see the landscape up close, breath in the fresh air, and get a bit of exercise. During field days, we encountered polar bears, arctic hares, ptarmigan, numerous lichens such as the beautiful orange Xanthoria (sunburst lichen) and many flowering plants that had turned red for the season. We timed our work perfectly to see the transition from warm, sunny days with water beetles swimming about in ponds to freezing winds, snowfall, and the departure of snow geese. 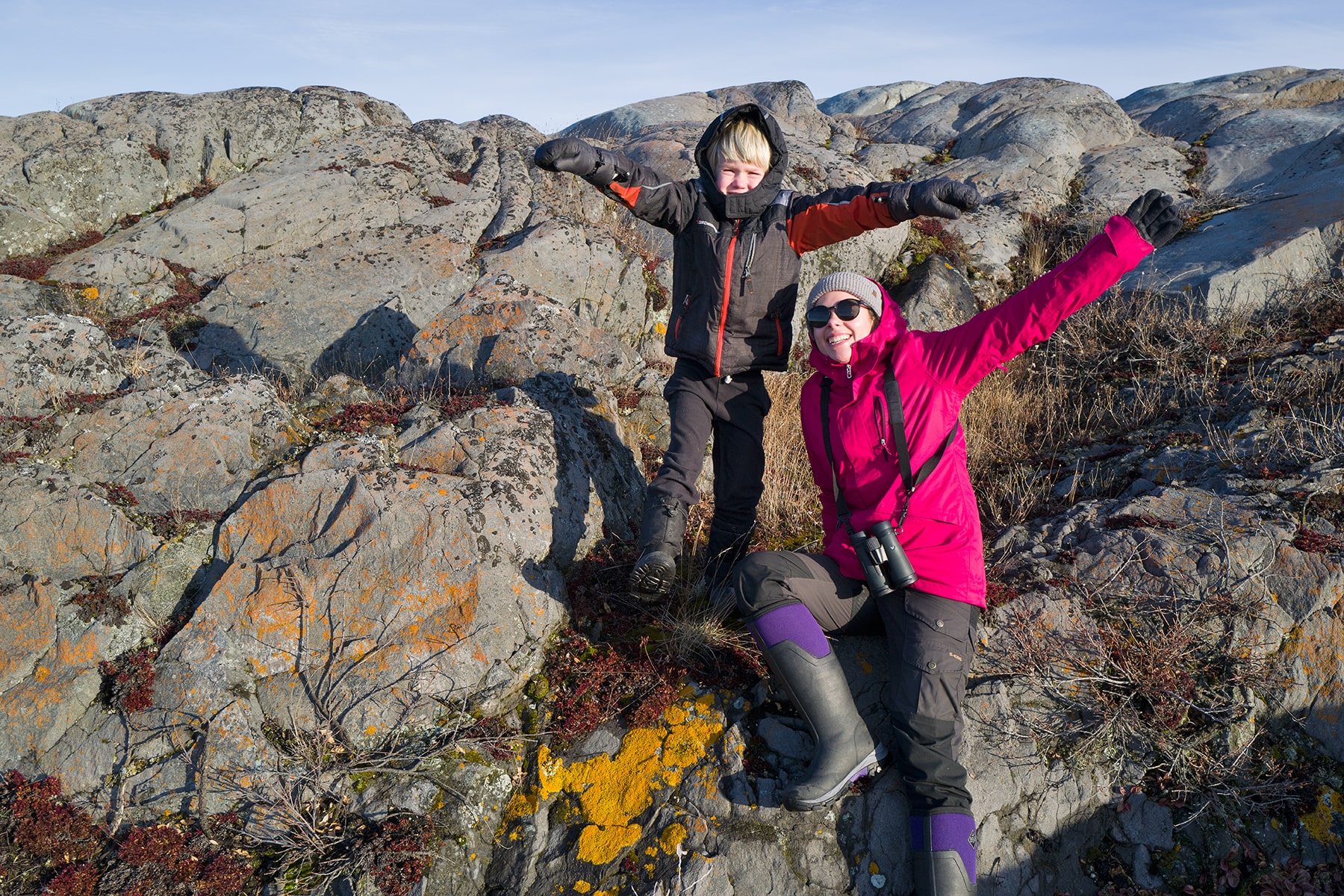 Jasper and Dani among the saxifrages (red plants in the cracks of the rocks) and Xanthoria (orange sunburst lichen). 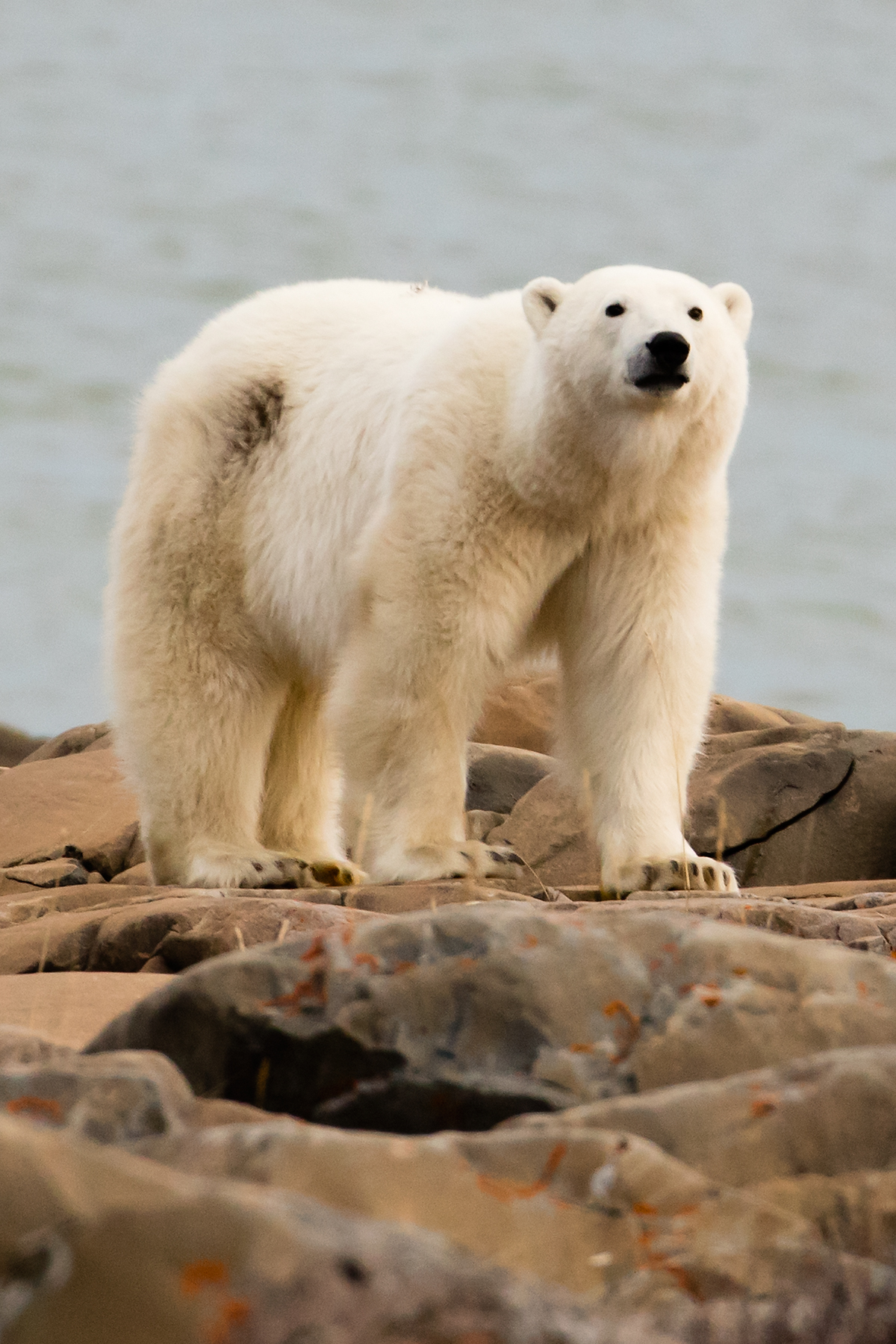 Polar bear watching us watching him while out in the field. 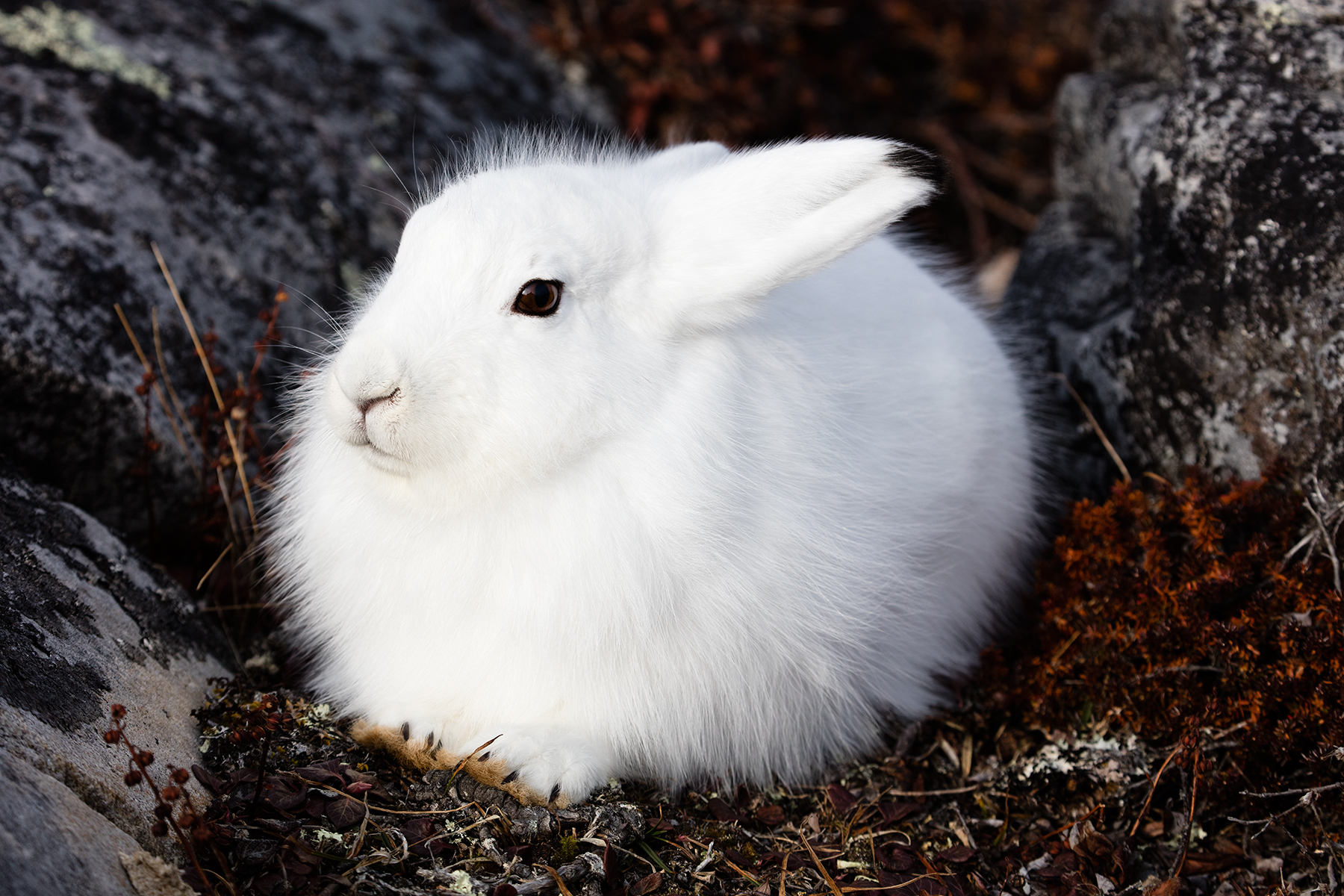 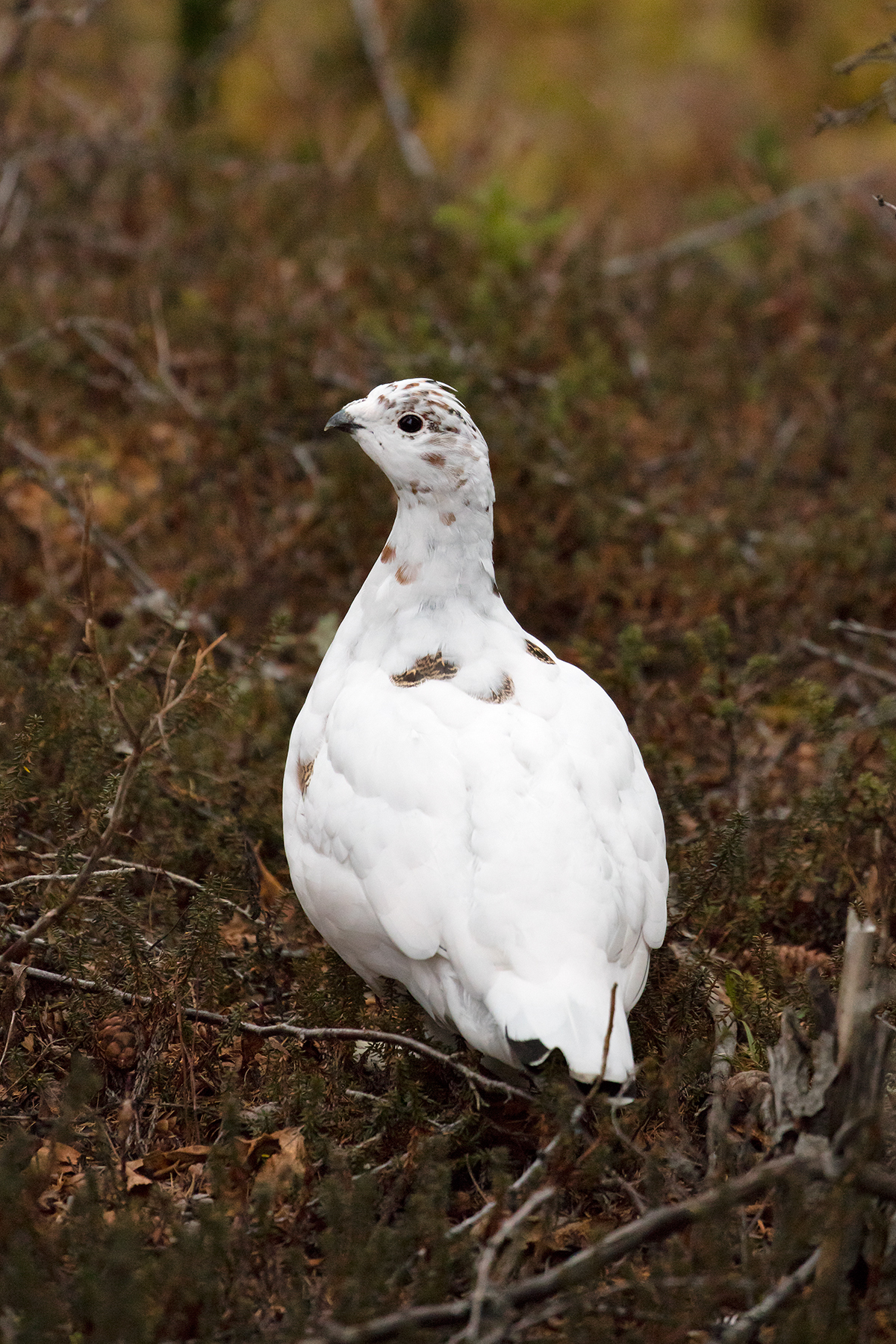 Our work didn’t end with our return from the field to the CNSC. Instead, the task became one of finding the critters nestled among the leaves and branches of the plants. In the lab, Gracie and Jasper dove right into the specimens and dug around in search of small animals. When they found something interesting, they placed it on the dissecting scope for closer examination. They found caterpillars, adult flies, bizarre-looking larvae, and unidentified egg sacs and webbing of sorts. Eventually, all of these were preserved in alcohol for later identification at the university. 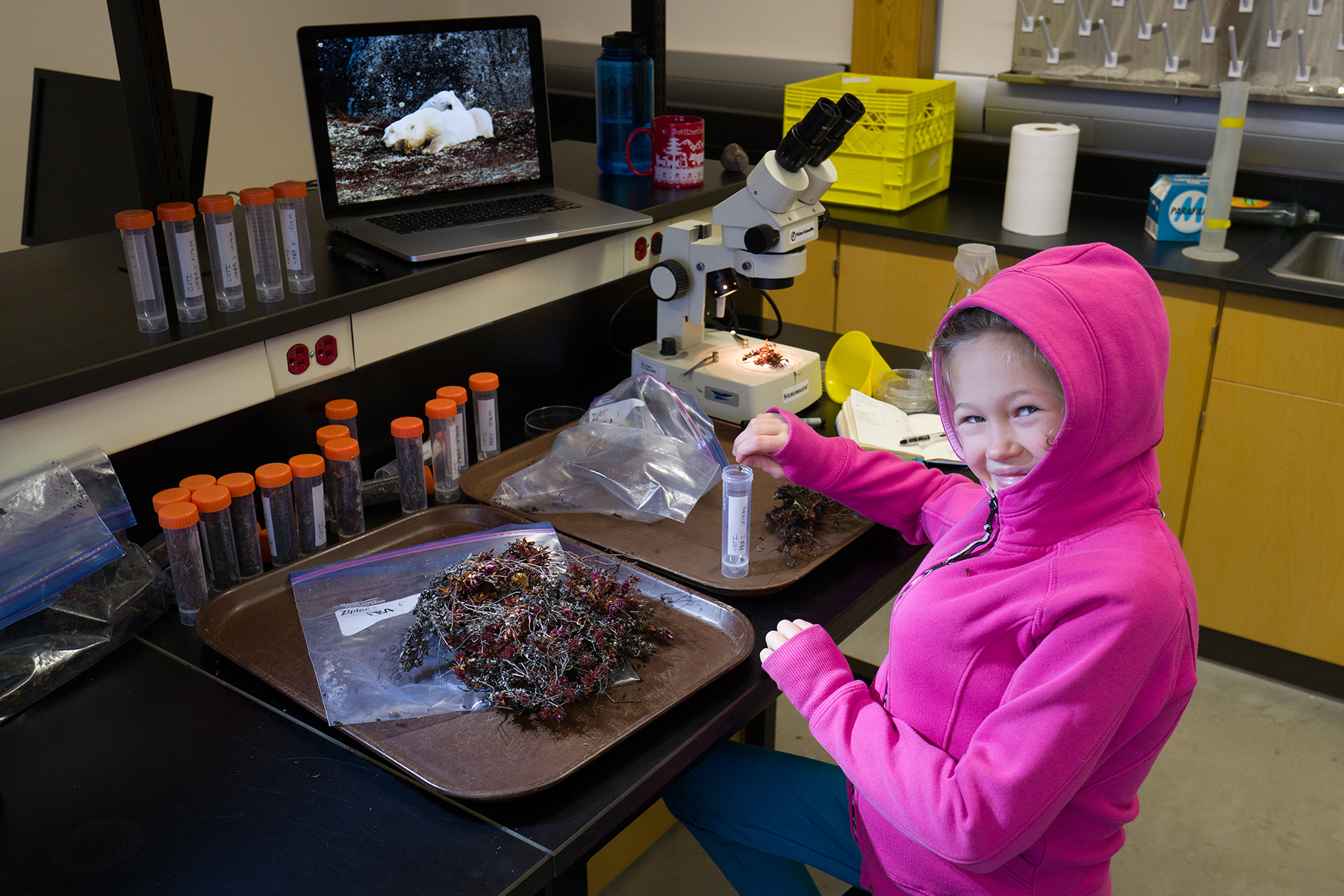 Gracie sorting through samples of Saxifraga tricuspidata in the lab (with a polar bear stuffy stuffed under her shirt).

Overall, the CNSC was an excellent resource for our research and family. Honestly, it couldn’t have been better! The facility itself was great for the family, with a library (including children’s books and games), an exercise room, an audio-visual room with couches for lounging, a billiards room, a second-story deck for stepping out into the fresh air, and a seemingly endless supply of cookies. But, it was the staff and volunteers that really made it a fantastic experience for the whole family. They were all so kind and understanding that the children felt comfortable in their home away from home. It was an invaluable experience for our family. 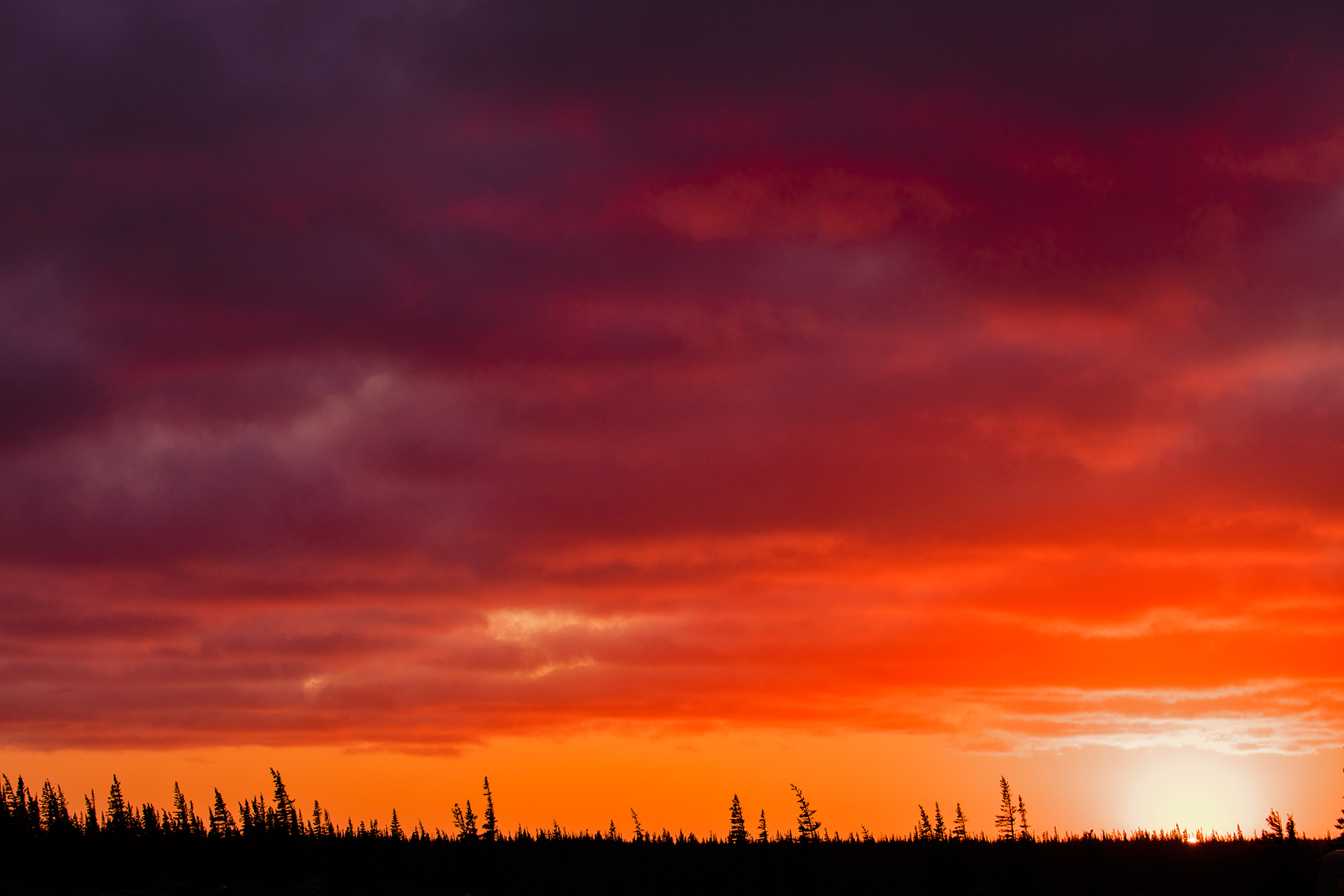 Sunset from the CNSC

Indeed, the only hard part was leaving. As the the train departed the station, the children said “Goodbye polar bears… Goodbye arctic hares… Goodbye ermine” and then with tears in their eyes, “Goodbye Bob… Goodbye Eric and Erica…Goodbye Jamie and Evan… Goodbye Judy and Sandy… Goodbye Kate and Julia… Goodbye Emma… Goodbye Dani…Goodbye LeeAnn… Goodbye Button Street…Goodbye Churchill…I don’t want to leave…” and they sobbed until the aurora lit up the skies like a beacon above the BirdFish, showing us the way that we will follow back to Churchill in the coming years. Thank you all so much!